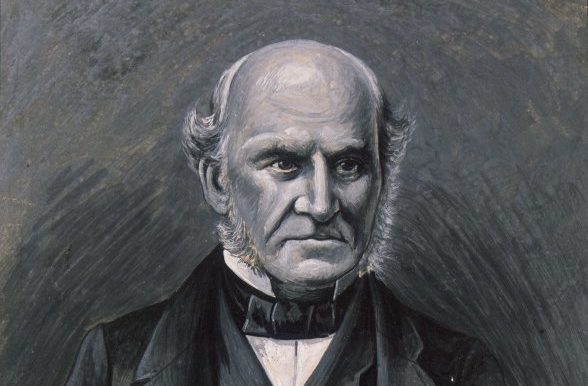 Kororāreka (now Russell) was a thriving trading hub, along with grog (liquor) shops, prostitution, escaped convicts, and whalers seeking recreation after long months at sea. It became known as the ‘hellhole of the Pacific’, hence the chiefs’ concern.

Busby’s role was to protect settlers and traders, prevent outrages by Europeans against Māori and apprehend escaped convicts. He had no means to enforce authority and was nicknamed the ‘Man-o-War without guns’.  From 1834 James, his wife Agnes and his children lived at Waitangi in what is known today as ‘The Treaty House‘.

Essentially Busby was a mediator or kaiwhakarite between Māori and British, but he had little success.  However, here at Waitangi he did host two significant meetings which are seen as important steps towards the Treaty:

2. In 1835, Busby drafted He Whakaputanga- The Declaration of Independence, signed by 34 northern Chiefs at his residence.  This was partly in response to a letter from the French declaring intentions to take over New Zealand. He Whakaputanga declared New Zealand a sovereign nation, requested protection from Britain and set up Te Whakaminenga, the Confederation of United Tribes.

After William Hobson’s arrival in 1840, Busby’s job as British Resident ended. He supported Hobson in drafting the Treaty in the Parlour Room of the Treaty House, which was signed on Busby’s front lawn on 6th February 1840. Having declined a position in Hobson’s administration, Busby went to Sydney in March 1840 to defend the validity of his land purchases which had come under scrutiny. Busby returned to New Zealand in November 1840. He found that the Waitangi property had been occupied in his absence and that its title was still under investigation.  In later years Busby lost his Waitangi property which remained derelict until the 1930’s, when it was purchased by the Governor-General, Viscount Bledisloe and donated to all of New Zealand.

James Busby died in 1871, after travelling back to England for an eye operation. His wife, Agnes, returned to New Zealand and later died at Pakaraka in 1889, she is buried in Paihia. What would they have thought if they knew that after 187 years, tens of thousands of people would still be visiting their old home here at Waitangi?