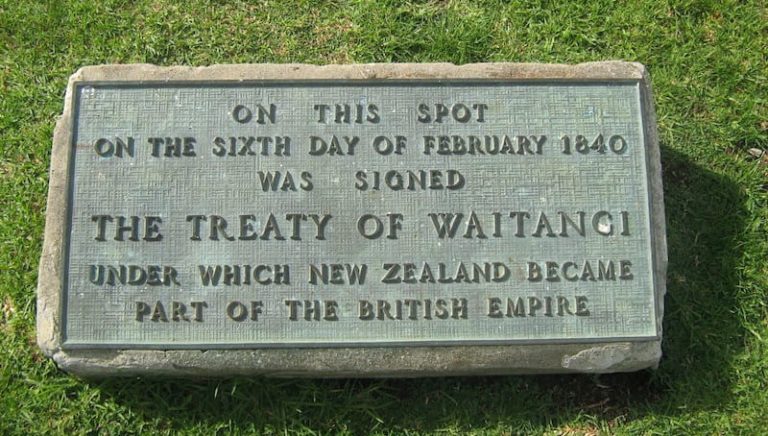 Waitangi Day - past, present and future

Header Image: This plaque at the base of the Waitangi Flagstaff marks the area where Te Tiriti o Waitangi was first signed by over 40 chiefs

Waitangi Festival 2021 held at the Treaty Grounds had a full programme of events to mark the day. In 1934, the first Waitangi Day commemorations began, with memorable milestones and moments since then.

The first commemoration on 6 February 1834 at Waitangi was two years after Governor-General Lord Bledisloe bought and gifted to the nation the rundown house of James Busby, where the treaty was first signed. Different perspectives on the holiday have been apparent since that first Waitangi Day. On that occasion, while the Crown was focused on unity, with Lord Bledisloe giving a speech about “one people”, Maori took the opportunity to look back on their independent status before the Treaty.

Māori leaders over time have used the occasion to make their voices heard by those in power, and, as such, Waitangi has always been a stage for debate. The first instance of this was in 1940, on the centenary of the Treaty, when Maori politician Āpirana Ngata gave his famous “Price of Citizenship Speech” at the opening of Te Whare Rūnanga, drawing attention to Maori concerns over race relations in New Zealand. Our newest museum, Te Rau Aroha, is closely centred around this; listen to his famous speech.

In 1947 commemorations became an annual event, after the Royal New Zealand Navy erected the flagpole on the grounds to perform a ceremony. Waitangi Day was recognised as a national day by 1960, and became a regional Northland holiday by 1963. In 1974 it was made a nationwide public holiday and renamed New Zealand Day – in 1976 it reverted back to Waitangi Day.

Explore a timeline of Waitangi Day commemorations over the decades. From then to now – check out today’s coverage of Waitangi Day 2021 in this news article as well as more on the Waitangi Festival 2021.