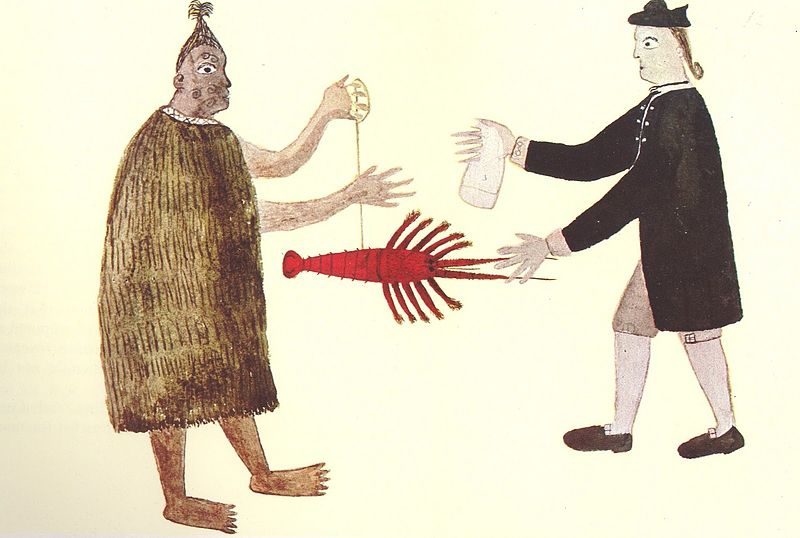 Header Image: Tupaia’s painting showing a Maori man and Joseph Banks exchanging a crayfish for a piece of cloth, c.1769.

Tupaia was on the Endeavour , the ship commanded by Captain James Cook, and without him Cook may have never found New Zealand.  So how did this extraordinary high priest, navigator, mapmaker and translator come to be aboard?

Cook set sail for the Pacific in 1769, stopping at the French Polynesian islands of Tahiti, part of the Society Islands. There he met Tupaia who was from an ari‘i (high chiefly) family, with estates, titles and a knowledge of the ancient sciences of Polynesia. Tupaia was many things; a linguist, an artist, and most importantly to Cook; an astrologist, expert navigator, mapmaker and master of Pacific geography. Tupaia’s knowledge was invaluable to Cook as he knew nothing about this region, so he asked Tupaia to join his crew. (Imagine how unfamiliar everything on board would have been for Tupaia!). Tupaia navigated using only the stars, the elements and his wisdom. Cook relied heavily on this expertise, as seen in numerous entries throughout Cook’s journals:

“26th July 1769: A mile off the shore lies two small Islands. Tupaia says there is a chain into a very good harbour…”

As the Endeavour sailed further south, Tupaia found himself in unfamiliar waters, and he worked with Cook on a chart of the islands around Tahiti. Using his wayfinding knowledge he referred to some 130 islands, and located 70 on this chart. Aotearoa New Zealand was not included, nor was it in the island lists that Tupaia dictated. The map is believed to have been completed at Queen Charlotte Sound on the South Island.(2)

Tupaia wasn’t with Cook’s party on their first landing at Tūranga-nui (Gisborne), which left a Māori chief, Te Maro, dead on the beach. The next day there was a second landing, where it was realised that Tupaia could understand and communicate the local language. Tupaia became Cook’s chief translator with Māori and helped with negotiating peaceful settlements and organising trade.  During their circumnavigation of Aotearoa New Zealand, Cook and his companions learned a great deal from Tupaia’s skills, experience and diplomacy.

From New Zealand, the Endeavour continued on to map the east coast of Australia and then onto what is now Jakarta, Indonesia on their way back to England.  Cook recorded Tupaia’s death as 11th November 1770 in Indonesia and it is thought he succumbed to malaria or dysentery. On his deathbed, he is said to have cried out to see his birthplace, Ra’iātea.

Many believe that Tupaia was in fact the most important man aboard the Endeavour. So why is Tupaia so often absent from our history books? The British did not acknowledge Tupaia’s contributions but for many Māori, Tupaia was revered and on Cook’s return in 1773 they referred to the Endeavour as ‘Tupaia’s Ship’. To this day many Māori speak highly of Tupaia in remembrance, however, throughout New Zealand we only see monuments to Cook and nothing to celebrate Tupaia. So the next time you see the Endeavour on our 50c coin, remember the wise Polynesian navigator, Tupaia.