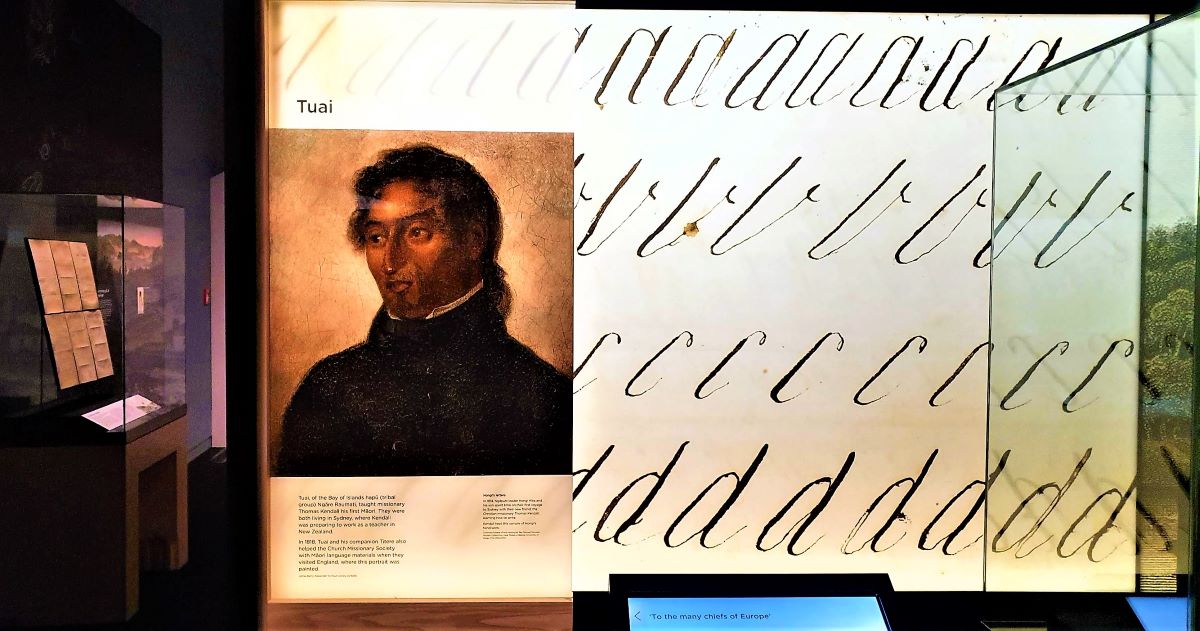 To the many chiefs of 'Ropi' Header Image: Te Kōngahu Museum tells the story of Bay of Islands chief Tuai, who in 1818 travelled to England with Titere and helped the Church Missionary Society with Māori language materials. The handwriting on display is of chief Hongi Hika, who co-authored the first Māori grammar and vocabulary book while visiting England in 1820

In the 1830s literacy rapidly spread as Māori learned to read and write in their own language; by the mid-19th century they had a higher literacy rate than the settlers.

One of the stories told in Te Kōngahu Museum of Waitangi is of Eruera Pare Hongi (originally Hongi) who attended the Kerikeri mission school. In 1826, aged 10, he wrote a letter to the many chiefs of ‘Ropi’ (Europe), the earliest example of independent writing in Māori. In the forthright, confident manner of a child he asks what the names of the chiefs over there are, whether they will send him some paper so he can write them letters, and lets them know he intends to come and visit and inspect their countries.

Eruera became a sought-after translator and scribe, helping with translations of Christian scriptures;  he also drafted and wrote the northern chiefs’ 1831 letter to King William IV as well as the chiefs’ 1835 Declaration of Independence when he was just 20 years old.

Those who learnt to read and write at mission schools passed on this highly-valued knowledge to others. The  new form of communication was used widely; in letters, diaries, petitions, journals, travel accounts, genealogies, biographies and memoirs, to record meetings and finances, make requests and express social, religious, commercial and political opinions. The first Māori language newspaper Te Karere o Niu Tireni  was published in 1842 and Māori newspapers and other forms of publishing flourished for a few decades.The first Māori language newspaper produced entirely by Māori is Te Hokioi o Nui-Tireni, e rere atuna in 1862; the press was a gift from Austrian Emperor Franz Joseph. For Māori, the power of the press was important to inform readers of colonial legislation, land sales, and national and international news.

By the early 1860s, Pākehā were the majority and English the dominant language; increasingly te reo was heard only in Māori communities living separately from Pākehā. Speaking Māori was officially discouraged, strictly suppressed in schools and speaking English was seen as the way to get ahead. Most Pākehā did not understand that the Māori language was an essential expression and envelope of Māori culture, important for Māori in maintaining their pride and identity as a people. Despite this, the language survived. Until WWII most Māori still spoke te reo as their first language. The war saw huge shifts into urban areas where English was the language of work, school and leisure activities. The number of te reo speakers declined rapidly. By the 1960s, television and other mass media were broadcast almost exclusively in English.

By the 1970s serious concerns that te reo Māori would be lost saw new groups emerge in the cities, committed to strengthening both Māori culture and language. The results of this on-going commitment are celebrated and built upon in Te Wiki o te reo Māori, celebrated this year from 13-19 September.

Find out more about the history of the Māori language