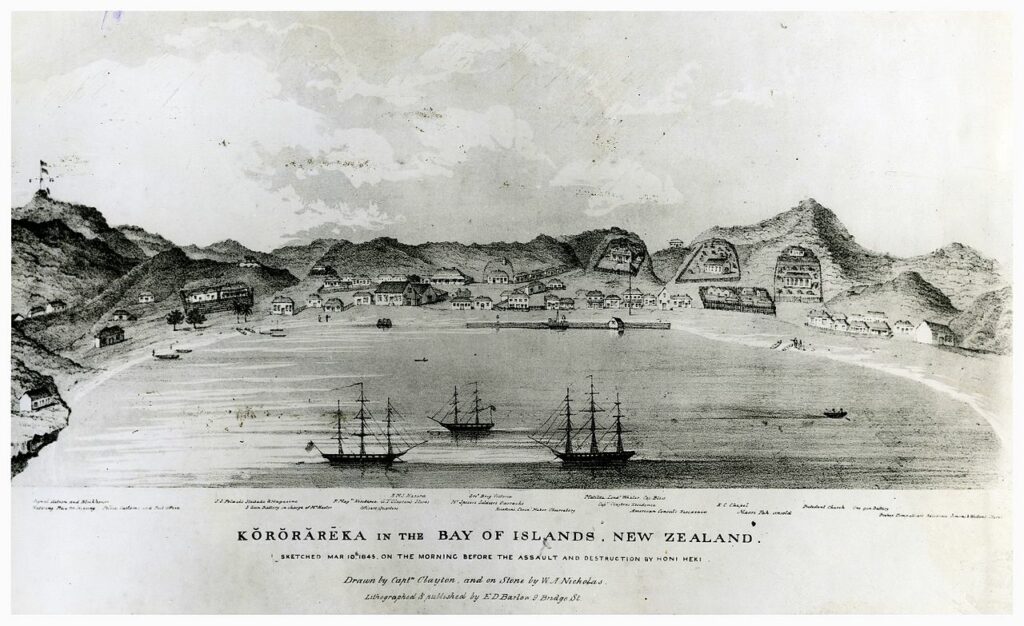 First serious challenge to the Crown

Header Image: Kororāreka, drawn by Captain Clayton on 10 March 1845, the day before the attack by Hōne Heke , Kawiti and forces. The contested flagstaff is seen at left atop Maiki Hill.

Felled again on 10 and 19 January 1845, the final blow on 11 March 1845 was the cause and target of the attack on Kororāreka that launched the Northern War.

Soon after the Treaty was first signed, Lieutenant-Governor Hobson had Te Kara, the flag of the United Tribes of New Zealand, removed from all flagstaffs and ordered the Union Flag to be flown in its place. For Māori, this signalled that their mana (authority) was not equal to that of the British. Māori found they had little say in anything and concerns grew that the country was passing into British hands as their colonial rules increasingly encroached on Māori interests. This was not what Māori had expected after signing the Treaty.

The allied forces of Hōne Heke, Kawiti and other Bay of Islands chiefs were the first to fight against the British military in New Zealand.  A set of complex dynamics saw Ngāpuhi chief Tāmati Wāka Nene siding with the British, providing support and advice. The Northern War continued for 10 months before peace was brokered.

Perhaps Hōne Heke, first to sign the Treaty, regretted doing so. He signed in good faith believing that Māori and British would share authority in Aotearoa New Zealand. During our time with students we discuss how in the past people often made decisions believing them to be the right ones at that time. It’s only with hindsight that we can look back and wonder how the course of history may have changed if things had been done differently.

Read more about the Northern War