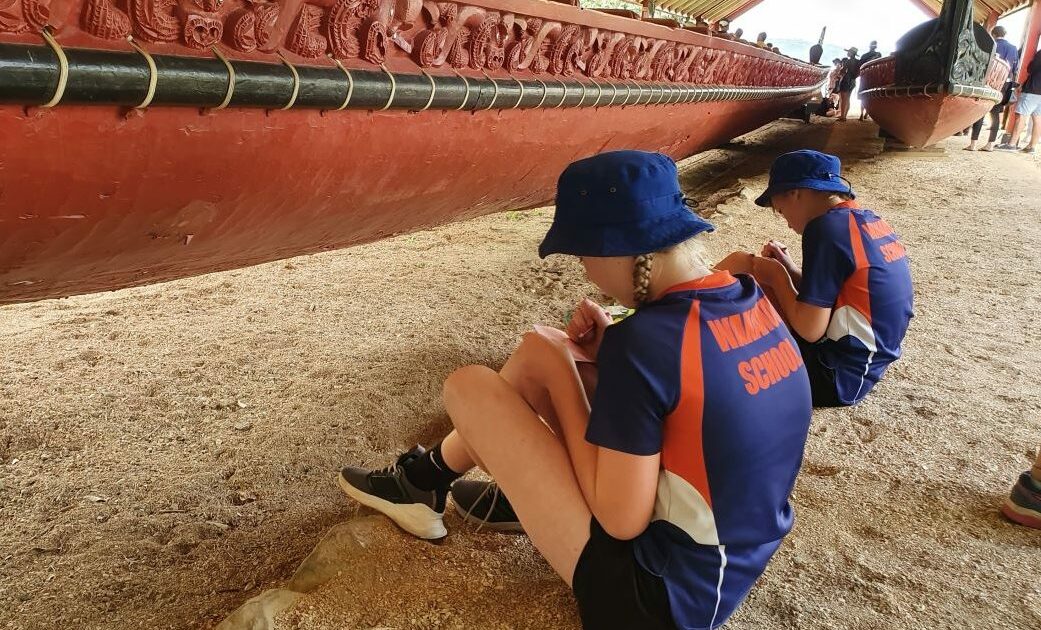 Header Image: Students get up close to the mighty Ngātokimatawhaorua and sketch their favourite carvings

As part of their Education Experience, Year 7 and 8 students from Wakanui School, Ashburton, explored the rich stories that waka and whakairo (carvings) tell as part of Aotearoa New Zealand’s history. They got up close to sketch some of their favourite carvings. During their busy morning with the Ed Team, this group savoured some special moments and personal connections.

In Te Kōngahu Museum of Waitangi, there was a proud moment of connection as we explored the interactive Treaty sheets and discovered the signature of one of the group’s ancestors who was a rangatira (chief)  – Hōne Tūhawaiki who signed the Herald-Bunbury Sheet as John Touwaick (Iwi: Ngāi Tahu, Ngāti Māmoe  Hapū Ngāti Ruahikihiki, Ngāti Huirapa). On the 10th June 1840, he was one of three chiefs who signed Te Tiriti onboard the HMS Herald at Ruapuke Island, one of New Zealand’s southernmost islands. The note next to his name on the Treaty sheet says ‘the most important in the neighbourhood’!  The identity of the other two rangatira remains a mystery.

Known as ‘Bloody Jack’ by whalers, Tūhawaiki was the most powerful rangatira in southern Te Waipounamu (South Island) at the time. He wore a ‘full dress staff uniform, of a British aide de camp, with gold lace trowsers and cocked hat and plume’. His island weatherboard home was well-furnished and he had his own trained bodyguard of 20 men, clothed and equipped as British soldiers.  At the signing, he asked for his 25 -30 tonne ship to be registered and for a guarantee of his land rights to Ruapuke Island, which is still owned by his descendants. These are the kind of fascinating anecdotes that bring history to life for students and help them to make those personal connections.

Another memorable moment for the group was being able to sing a special waiata (song) inside our intricately carved Te Whare Rūnanga (The Meeting House). This was to express appreciation to Te Pitowhenua after their wonderful cultural performance.  International visitors at our shows also enjoy this glimpse into New Zealand school life.

Wakanui School students, teachers and whānau travelled about 1400 km to visit the birthplace of our nation as we know it today. They made the most of their time here, soaking up all of Waitangi’s beauty, culture and history and taking away some wonderful memories and connections. Ngā mihi nui kia koutou ngā kaiako, ngā kaimahi me ngā tauira o tēnei kura, o Wakanui School!

(Information about Hōne Tūhawaiki who signed as John Touwaick taken from ‘Te Tiriti o Waitangi The Treaty of Waitangi 1840’,  first published in 2017 by the Department of Internal Affairs/Bridget Williams Books Ltd)