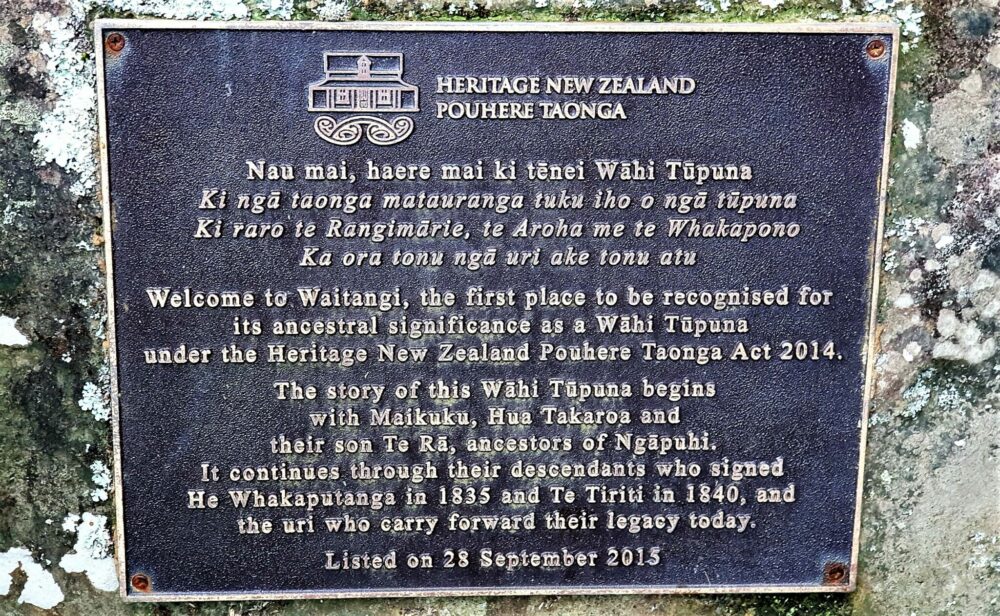 Stories of our Māori Placenames

Header Image: This plaque at our main entrance recognises the Waitangi Treaty Grounds as a Wāhi Tūpuna

Aotearoa has the record for the longest placename in the world, which tells quite a story. One of the stories behind the name Waitangi  is a tale of romance and legacy – the story of Maikuku and Huatakaroa, with a little help from a taniwha!

Maikuku was a local chief’s daughter, renowned for her beauty. She was a puhi (a young woman kept sacred) and was sent to live apart from her people in a cave in the cliffs near the beach here at Waitangi. A young man called Huatakaroa searched and searched for her. He was guided to her cave by the tangi (wailing), of a taniwha, a water spirit – which is one of the stories behind Waitangi (weeping waters): wai (water) and tangi (wailing or weeping). The couple had a child, Te Rā, who became a famous ancestor of the Ngāpuhi hapū Ngāti Rāhiri.

The beach shown above at Waitangi Treaty Grounds was originally named Te Ana o Maikuku to commemorate Maikuku. Today it is also known as Hobson Beach to mark the arrival of Captain Hobson here in 1840. The waka shelter here is named Te Korowai o Maikuku – The Cloak of Maikuku, in honour of Maikuku.