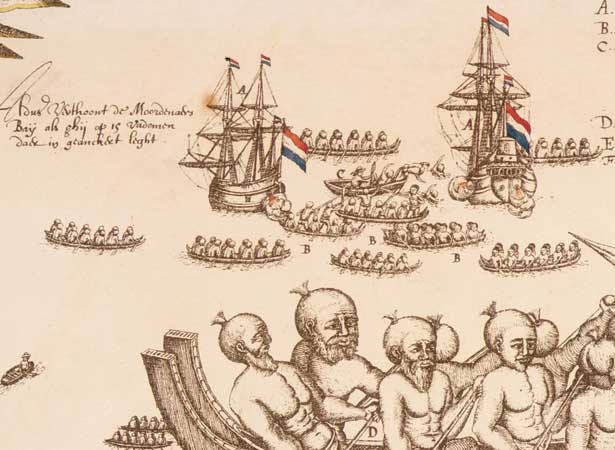 On this date in 1642, Abel Tasman’s Dutch East India Company expedition anchored their two ships at Mohua (Golden Bay, South Island). The local Māori, Ngāti Tūmatakōkiri, would have been mystified by the sight of these bizarre vessels. The first conversation between two worlds began with discord and incomprehension, leading to fear and attack, death and retreat.

Locals paddled out in two waka, challenging the intruders with ritual incantations and pūtātara (conch-shell trumpet) blasts, perhaps to scare them away, believing they were the feared patupaiarehe, fair-skinned fairy folk or ghosts. A pūtātara was traditionally used as a signalling instrument – for announcing, warning or welcoming. In response, the Dutch shouted and blew their own trumpets and then fired a cannon; to Māori this must have sounded like a challenge to their challenge.

Next morning, many waka paddled out to the Dutch ships. Four Dutch sailors were killed after a small boat was rammed by a waka. Tasman decided to leave immediately, abandoning hope of having friendly relations with the locals. He named the bay Moordenaers (Murderers) Bay. As they sailed for Cook Strait, eleven waka paddled towards them. A man standing in a large waka held a small white flag, possibly a peace sign, but as they drew closer, Tasman’s men fired, hitting and killing him.

Traces of the Dutch travels were left in maps and books published at home, and in the stories of those they encountered. Dutch mapmakers called this land Nieuw Zeeland, after Holland’s coastal province and after a couple of spelling changes, this is the name that has stuck.

While Tasman had been warned of the possibility of attack, Māori had experienced a number of bewildering firsts – firearms, tall ships and white men. It would be more than 120 years before Māori and Europeans next met, with the arrival  of James Cook in 1769.

Read more about this first encounter